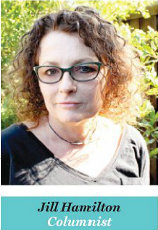 Jill Hamilton is the mother of two teenage girls and lives in Long Beach. You can email her at jill.longbeach@yahoo.com

Neurodivergent is a term that loosely encompasses people with different kinds of learning styles and social behaviors, like people who are within spectrums or those with ADHD. I like the term because it doesn’t label certain types of people as “normal” and others, by default, as “not normal,” but recognizes that human brains come in different styles. (The contrasting term is neurotypical, though my friend who is on the spectrum and has similarly Neurodivergent daughters calls us “Muggles.”)

As a parent of a neurodivergent teen, I’ve done plenty of hand-wringing about her lack of social skills, her difficulty in articulating all that is on her mind and a shyness so strong that she gets nervous even when composing an email to a teacher.

I’m beyond embarrassed to say that for most of her 19 years, I have focused on these areas, looking to fix, improve and adjust. But lately, I’m learning to look at her neurodivergency in a different way. As insights do, this came in from several different angles at once.

“Traditionally, kids with special needs have been looked upon in terms of their weaknesses; all of the emphasis is on what they don’t do well. We focus on kids’ strengths,” said Dr. Ellis Crasnow, director of STEM³ Academy. “Yes, I want to support their weaknesses, but that’s not the whole game.”

STEM³ Academy is a K-12 STEM-focused school for neurodivergent kids where the goal is finding strengths in these differences. STEM³ will be hosting two summer camp sessions in OC in July. (Go to stem3academy.org).

Neurodivergent kids can have skills such as superior focus, attention to detail or a dogged determination to solve a perplexing problem, he said. Fostering these strengths is not only more enjoyable for kids, but these skills are often very marketable, offering a smoother pathway into careers.

For almost two decades, I had been focusing on the wrong aspects of my daughter’s differences. Yes, my daughter goes silent in a conversation with a stranger, but she is amazing at research, finding out travel information and keeping us all on track with our schedules. She loves filling out forms, paperwork, and details. Once, when she received the instruction to read the syllabus for a new class, she joked to us, “Oh, I will!”

These are all things to value.

“I only speak when I think it’s necessary; now is one of those moments,” she says in her powerful TED talk, which has more than 2 million views.

Her different ways of thinking are precisely why she is such a good messenger for the rest of us; she sees the situation with utter clarity.

“For those of us who are on the spectrum, almost everything is black or white,” she said. “If the emissions have to stop, then we must stop the emissions.  To me that is black or white. There are no gray areas when it comes to survival. Either we go on as a civilization or we don’t. We have to change.”

Hannah Gatsby, of the comedy deconstruction “Nanette,” breaks down how she works with her neurodivergence in a new TED talk.

“In the real world, I struggle to talk to people because my neurodiversity makes it difficult for me to think, listen, speak and process new information all at the same time,” she said. “But onstage, I don’t have to think. I prepare my thoughts well in advance. I don’t have to listen. That is your job. And I don’t really have to talk, because, strictly speaking, I’m reciting.”

The inner emotional fatness that was issued with her type of brain actually helps her with standing up alone in front of a crowd.

“If you need any more proof I’m neurodivergent, yes, I am calm doing a thing that scares the hell out of most people. I’m almost dead inside up here,” she said, joking, and not joking.

“I think success depends more than 50% on how you relate to other people,” said Crasnow, who encourages self-isolating kids at STEM³ with team activities and group work that help teach emotional skills.

If your child isn’t in a special school, Crasnow said, there are lots of things parents can do informally to help, like scheduling play dates with kids of similar abilities, encouraging them to talk with you and finding activities that encourage them to think on their feet.

In retrospect, I agree that informal help is key. Without any real guidance, I was panicky and tried to wing it. The grade school era “friendship exercises” I forced my daughter to do, like “Smile at one person today,” were an utter failure. She never did them, even once, although we did learn the communication style of “fighting about the stupid friendship exercises.”