Principal Lisa Reid, right, works with a fourth-grader in the Innovation Lab at the STEM³ Academy in Irvine. It’s the only k-12 school in the nation to provide STEM curriculum to students with social and learning differences. (Kevin Chang/Staff Photographer) 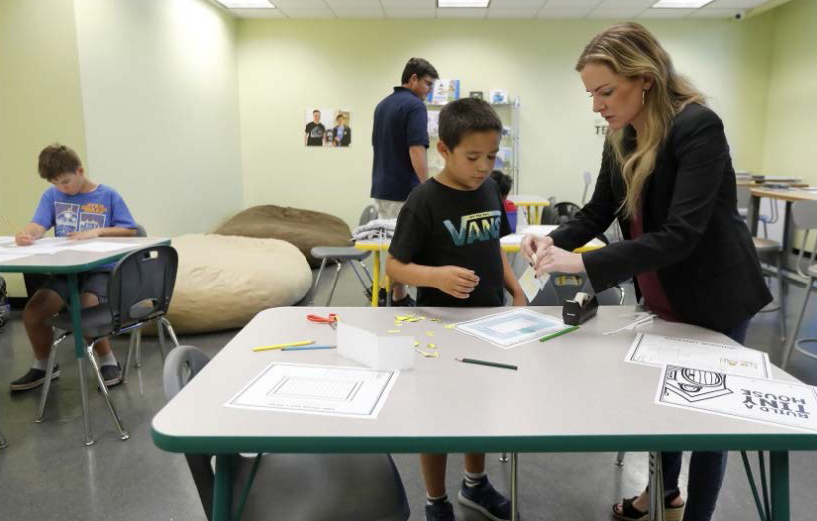 Irvine school provides a STEM education to children with disabilities

With three campuses in Southern California, including a new facility in Irvine, STEM³ Academy is the only school in the country to provide STEM-based learning to children with disabilities from kindergarten through high school.

Through tailoring teaching methods to individual students, the academy is a refuge for children with high-functioning autism spectrum disorder, attention-deficit/hyperactivity disorder (ADHD) and other social and learning differences.

“Kids with special needs typically don’t do well past high school,” said Ellis Crasnow, director of STEM³ Academy. “The focus of this school is to do what we can to help them do better past high school.”

According to Autism Speaks, more than half of individuals with autism remain unemployed and unenrolled in higher education in the two years following high school. According to the organization, ADDitude, 35% of teens with ADHD drop out of school.

Standard schools are generally ill-equipped to deal with children who have social and learning differences.

Crasnow said children face anxiety, bullying and difficulty socializing. Teaching methods may also not be suitable to the individual child.

A fourth-grader works on creating a tiny house at the STEM³ Academy in Irvine. (Kevin Chang/Staff Photographer) 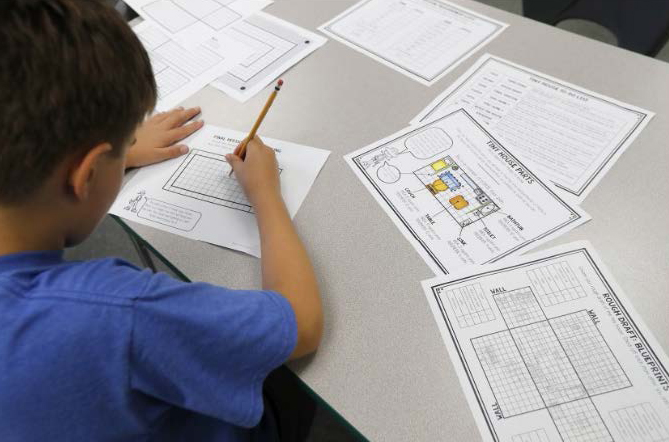 STEM³ Academy teachers use a student-centered approach, which they say leads to a moreactive form of learning.

Crasnow said the traditional role of the teacher “bombarding” students with facts leads to more passive learning, which is less than ideal for students with learning challenges.

Lecturing is minimized, classes are small — with a maximum of 14 students — and assignments are geared toward real-world problem solving.

There are no individual desks at the STEM³ Academy to encourage children to work together.

Crasnow said students with learning and social disabilities tend to isolate themselves.

The academy has students take part in innovation labs, which has a computer numerical control machine, 3D printer and computer-aided design machines. STEM³ Academy also has a robotics team that competes internationally.

“I want students to be doing and making,” Crasnow said. “Information is a commodity today. Facts aren’t important anymore; it’s what you do with the facts. These students need to be able to manipulate and analyze the data.”

STEM³ Academy was founded in August 2015 in Valley Glen. A Culver City campus opened the following year. The academy is run by the Help Group, a nonprofit that serves special needs children.

The Irvine campus is still in its infancy, with only three students, but the goal is to serve 120 to 150.

Having a campus in Irvine amid a burgeoning tech industry is strategic. “You’ve got this huge presence in Orange County with biotech and gaming companies,” Crasnow said.

The academy brings in speakers to connect with students, and it holds an innovation fair with major tech companies.

Crasnow said these partnerships are useful in helping students find their career paths. However, students may choose to depart from the STEM path, and STEM³ Academy is supportive of them as well.

“We have kids who are great artists and wordsmiths, in addition to those who are gifted in math and science,” Crasnow said. “I view my job as how can I support them in their passions. 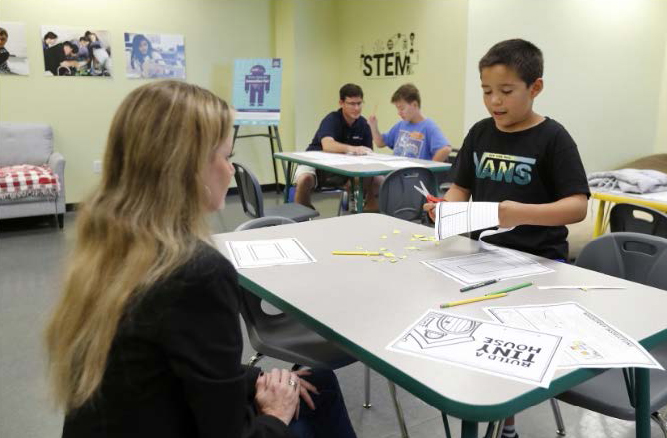 Academy alumnus Han Ewald, 18, of Los Angeles said he was able to focus better at the schooland learned how to work well with others.

“The small class size was so amazing,” said Ewald, who spent his last two years at the academy. “They really cater to the individual student.”

Ewald’s most memorable project involved traveling to the Galapagos Islands and providingscientific descriptions and photos of its sea and land animals.

The project is atypical for a science-, math- and engineering-based school, but Ewald said STEM³ Academy is serious about supporting students in their passions.

“I loved this project because I was able to focus on something I loved,” Ewald said.

Ewald will start at Cal Poly San Luis Obispo, where he plans to major in animal science or zoology, in a few weeks.

About The Help Group Founded in 1975, The Help Group is the largest, most innovative and comprehensive nonprofit of its kind in the United States serving children, adolescents and young adults with special needs related to autism spectrum disorder, learning disabilities, ADHD, developmental delays, abuse and emotional challenges and has recently expanded its reach to include LGBTQ+ young people and homeschooled students. www.thehelpgroup.org

The Help Group Expands its Reach to Orange County